After a lovely first day at Coonoor, we looked forward to what the next day had in store for us.

It rained through the night, and there was a slight drizzle outside when we awoke. After breakfast, the drizzle had stopped, and we enthusiastically set off on a HIKE through Coonoor. It was a beautiful day, cloudy, cool, and perfect for a loooong walk in the hills.

The route for this hike had been recommended by a friend. He had given us a hand-sketched map, and we followed the directions. Unfortunately, we missed a turn, and continued onward on the wrong path. Soon, we were looking for a post office and Darlington bridge, but no there was no sign of either landmark :(. We passed the Taj resort, and soon realized that we were probably on a completely wrong route.

We backtracked our way, and were elated when we spotted the post office!! It was about 2 km of extra distance travelled due to our oversight. But hey, it had been fun, nevertheless. We reached Darlington Bridge, our next landmark. So far, so good. Crossing the bridge, we followed signboards with directions to Lamb’s Rock. We walked along a bend in the road, and VOILÀ – was this HEAVEN? 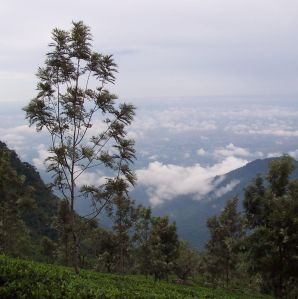 The most scenic landscape greeted us!! Tea estates surrounded us, and clouds floated in the valley below. We walked along, totally immersed in the marvellous views all around. At Singara Tea Estate, we halted for a tea break. This estate is owned by none other than Bollywood actress, Mumtaz.

Resuming the hike, we were in completely different surroundings soon. We were passing through a thick jungle, where insects were making very shrill noises. An extremely high decibel level! The vegetation was so thick that when we looked up sometimes, we couldn’t tell if it was day or night. A host of tourist vehicles sped past, with folks casting curious glances at us. A few small temples dotted the route. Some time later, we reached Lamb’s Rock view point.

Sleeping Lady, Coonoor. Do you see a resemblance? 🙂

From here, we spotted a mountain called “Sleeping Lady” (supposedly resembles its namesake, but we could think of several other objects/shapes that the mountain resembled!). We munched on the sandwiches that we had packed, a little picnic lunch for us. On spotting a bus stop nearby, we waited there, for a bus ride to Dolphin’s Nose. It was a long wait for the vehicle. 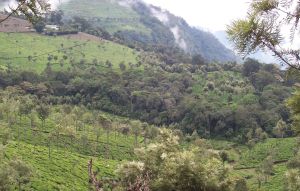 However, with the glorious scenery around, it was one of the rare instances when we did not mind waiting one bit.

Along came the bus and it transported us to Dolphin’s Nose. From there, it was a 1 kilometre walk to the view point. We hiked through tea gardens, romancing the clouds on our way. 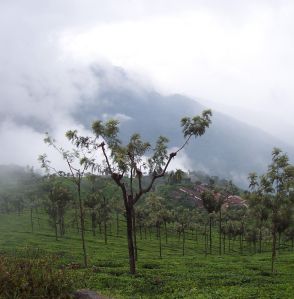 Our rendezvous with the clouds, Coonoor

Yes, clouds floated by, in our face, and it would be a complete understatement to say that we enjoyed this walk. It was truly OUT-OF-THE-WORLD. At the view point, there was no dolpin in sight ;). Well, there was a white cloud blanket all around. We found a perch for ourselves, and had the clouds for company. It is a wonderful feeling when the cold wetness of a cloud touches your face. We just sat there at Dolphin’s Nose, enjoying our rendezvous with the clouds :).

Peering through the clouds at Dolphin's Nose, Coonoor

A little later, a light drizzle started. A cup of masala tea and some corn provided the icing on the cake!! 🙂 We walked back to the bus stop, armed with an umbrella, completely thrilled with this experience. A lengthy wait for the bus to arrive, but hey, there was plenty more scenery to admire in the meanwhile :). The clouds receded, and revealed breathtaking views of the town of Mettupalayam in the valley.

By the way, the Airtel cellphone signal was at full strength at this place :), quite impressive! The bus arrived, and we headed back to Coonoor town. On the way, we caught a glimpse of Kattery waterfalls.

Back at the club, we decided to explore the area around. We strolled along charming streets and saw the other side of Coonoor – schools, churches, buildings from the British era. It was a lovely evening walk through the town. Dinner at Hotel SreeLakshmi followed.

The end of a great time at Coonoor, it was time to bid goodbye to this lovely hill station with its narrow winding roads (that took our breath away, literally :)), beautiful tea estates and fantastic views. The next morning, we headed to Coimbatore by bus. We were pretty much used to the hairpin bends now, and not so nervous this time. We will definitely return to Coonoor. Walking through the clouds here is a “never-to-be-forgotten” experience for us. From Coimbatore, we traveled back to Bangalore by the InterCity Express, taking back with us, a “cloudful” of experiences and memories.

← Cool Coonoor: A Cloudful of Memories (Part I)
A Noisy Sunday at the Martin Farm →

4 thoughts on “Cool Coonoor: A Cloudful of Memories (Part II)”